Let’s face it (no pun intended), we all need a little extra help with our skincare as we mature – collagen production slows down, skin loses its elasticity, and the tell-tale fine lines and wrinkles take hold. We hear a lot about skincare that can help to slow the signs of ageing, but what about skincare devices?

New(ish) to the Australian market, and developed in the skincare mecca of South Korea, the Plabeau G4+ Plasma Skin Rejuvenation Device uses non-invasive, cool and painless plasma technology (delivering up to 20,000 pulses per second), to break down air particles into active plasma ions at a rate of 1 billion ions per second. Sounds impressive and science-y, but what does this mean for skin? The delivery of plasma ions helps to boost hydration and collagen, soothe irritation, remove harmful bacteria and enhance the absorption of active ingredients in skincare products. In fact, studies have shown that after just 10 minutes of using the Plabeau G4+ skin has a 41% increase in the amount of active ingredients absorbed. This means, the ingredients from your skincare are reaching the target skin cells more effectively, leading to more optimal results. Clinical studies have also shown the Plabeau G4+ to produce powerful anti-ageing results, with fine lines and wrinkles being diminished by 26% after 6 weeks of use. And it’s not just useful as an ant-ageing aid. According to Terri Vinson of Synergie Skin (the Australian distributor for Plabeau), the Plabeau G4+ also effectively relieves inflammation and kills harmful microbes, making it the ideal skincare device for those with problem skin, irritated skin, redness, acne and dermatitis.  Whether it’s for anti-ageing, acne, redness or dermatitis so many people will benefit from using the Plabeau G4+. As a bonus, when you purchase the Plabeau G4+, Synergie Skin is including a complimentary Dermiotic pre-serum elixir (pictured with the Plabeau Device). Plabeau G4+ RRP $529.00.

I was lucky enough to enjoy a treatment with the Plabeau G4+, and it is everything they say it is. The serums used absorbed instantly into my skin. My skin felt plumper and just glowed, after one use, and yes, it is completely painless. 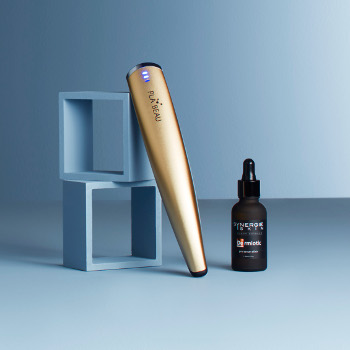