United Nations Universal Children’s Day (today, November 20th) is a day observed internationally as a day of activity devoted to the welfare of the children of the world, including the right to life, to health, to education and to play, as well as the right to family life, to be protected from violence, to not be discriminated, and to have their views heard.

Marking the day this year, international lifestyle brand Jeunesse Australasia, and their charitable arm Jeunesse Kids, are bringing attention to the hidden struggles of children affected through a national purpose campaign. In partnership with not-for-profit charity Friends with Dignity, the initiative launched today through a grand reveal of a raw, emotionally moving interactive mural and animation film titled ‘Sarah’s Story’ on York Street in Sydney’s CBD. 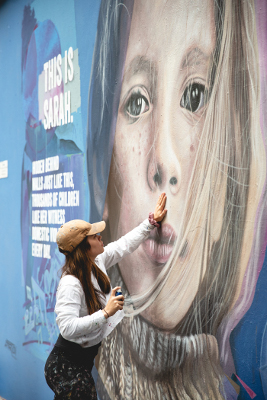 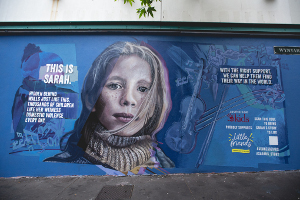 It’s a sad fact that in Australia, more than 1 million children are affected by domestic and family violence (source Mission Australia). Experts say that exposure can lead to short and long term negative mental, behavioural, and social effects- and those who witness physical, emotional or verbal domestic violence are twice as likely to abuse drugs, and six times more likely to die by suicide. Jeunesse Australasia hopes to raise awareness around these sobering statistics through ‘Sarah’s Story’—a story based on the real-life events of a 6-year-old child affected by exposure to domestic violence in the home, and her remarkable recovery through the charity’s scholarship program called Little Friends.

The powerful mural reveals a striking image of a young girl named Sarah, and also features a QR Scan Code that will bring Sarah’s story to life in a short animation film—revealing her tainted relationship with music, which stemmed from her parents’ attempts to drown out and shield her from the domestic violence happening behind closed doors. The violin acoustics that play in the animation film is an original recording that come from the young girl herself, who through the scholarship program learned to play the violin and in doing so recreated a positive relationship with music. You can see the film here. 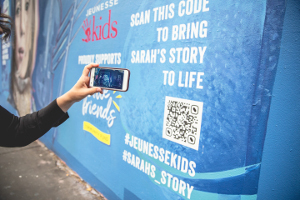 General Manager of Jeunesse Global Australasia—Rachel McVinish believes that ‘Sarah’s Story’ is a truly touching example of the Little Friends scholarship program and the Jeunesse Kids partnership—one which they hope will empower communities to give children a brighter future. The Little Friends biannual scholarships help to cover a variety of areas—from helping kids attend camp and after-school activities with their peers, to providing uniforms & textbooks and extra-curricular activities including equipment for music classes. To donate to these scholarships, please click here: https://www.mycause.com.au/page/217839/little-friends-scholarship-supported-by-jeunesse-kids

If you, a child or another person is in immediate danger, call 000.  For sexual assault domestic and family violence counselling service call 1800 RESPECT 1800 737 732. 24/7 phone and online service.